What Is NPA(Non Performing Assets)?

Non Performing Assets (NPA) are classification of loan or advance that has been granted to companies that remain unpaid by the borrower and has been outstanding or overdue for more than 90 days.  The situation of overdue arises when the loan is not paid by the due date fixed by the bank. They are also termed as bad assets.

Usually, the health, as well as the financial condition or stability of a bank, is measured through the proportion of bad assets or Non Performing Assets with it. From the banks’ point of view, the higher the NPA, the lower will be its financial stability.

Non Performing Assets (NPA) are generally explained on the bank’s balance sheet and the percentage of NPA out of the total advances has become a needed ratio that helps the banks to keep a check on before.

The banks define their advances into the following four broad groups: 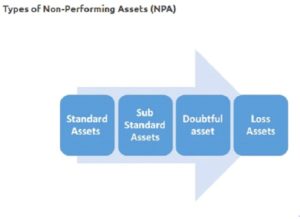 Standard Assets: A Standard asset is one in which the borrower fails to make repayment regularly and on time. It does not carry a normal risk to the business.

Sub-Standard Assets: A Sub-Standard asset is one that has been NPA for a period not exceeding 12 months. It is an asset in which the bank has to maintain 15% of its reserves. In the case of the term loans, those where installments of principals are overdue for a period exceeding one year should be treated as sub-standard.

Doubtful Assets: A Doubtful asset is one that has been NPA for more than 12 months. In the case of term loans, those where installments of the principal have remained overdue for a period exceeding 18 months should be treated as doubtful.

Loss Assets: A Loss asset is one where the loss has been identified by the bank, through the internal or external auditor or by the central bank inspectors. Though the amount has not been written off, fully or partly.

Also, Read–HoW TO READ THE ANNUAL REPORT OF A COMPANY

One of the main causes of NPAs into the banking sector is the loan system under which commercial banks are required to lend their credit which is 40% to priority sectors.

There exist certain internal and external factors which are responsible for an account becoming NPA  such as:

WHY NPAS ARE BAD FOR BANKS?

Banking Industry is seriously affected by the rising NPA cases. Stress and problems in the banking sector cause less money available to fund other projects, therefore, it harms the national economy as well as internationally.

In the case of public sector banks, the bad financial health of banks means a bad/less return for shareholders which means that the government of India gets less money as a dividend. Therefore it may impact the easy usage of money for social and infrastructure development in the country.

Due to high NPA, the bank also loses the faith of the public and the goodwill of the bank decreases which directly affects the deposits of the bank. NPAs have become a parameter to decide the actual ranking of the banks based on advancing loans to the public.

The need of the hour is to tackle the rising NPAs on urgent basis. These steps should be taken into consideration:

Open chat
1
Need Help?
Hello
Can we help you?